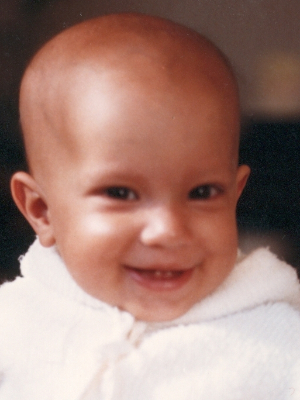 This is an ONLINE Hallowe'en trivia challenge which you can play at your own pace, from the comfort of your own home!

75 questions about the history and traditions around Hallowe'en ... it's spooktacular!

There is no registration fee for this event, but if you enjoy doing it, please consider making a small donation.  Choose a nickname for yourself, then click HERE to take the quiz

This event is in support of the Oncology department, in memory of Sian Bradwell.

When Sian (a Welsh Gaelic name, pronounced "SHAHN") was 5 months old, her parents found a lump on her foot, which doctors diagnosed as a very rare form of cancer called Primitive Neuroectodermal Tumour.  They thought it started in her pancreas and spread through her bloodstream.

Her femur -- the biggest bone in the body -- had broken, and she could not pull herself upright in her cot.  Her parents were told that cancer makes bones very frangible -- easily broken.

After months of chemotherapy, radiation treatment and multiple surgeries, things started to look up.  In consultation with the Paediatric Oncology Group (some 16 hospitals across North America which shared information on chemotherapy protocols), the doctors tried experimental drugs, and Sian responded.  That is, until Christmas day, when her mother found lumps on Sian's jaws and legs.  More radiation followed, but it was a temporary reprieve.  Sian died less than 3 months
later, at the age of 17 months.

In her memory, her parents set up The Sian Bradwell Fund to help pay for medical equipment for the better diagnosis and treatment of children with cancer.

The Fund was incorporated in 2000 and is run 100% by volunteers.  It  was re-certified as a non-soliciting Not-for-Profit organisation in 2014 and reports annually to Corporations Canada.

Sian's story is not unique, unfortunately ... please consider making a donation to benefit of children who are going through what she once did.

THANK YOU FOR YOUR GRACIOUS SUPPORT!

If you think this page contains objectionable content, please inform the system administrator.